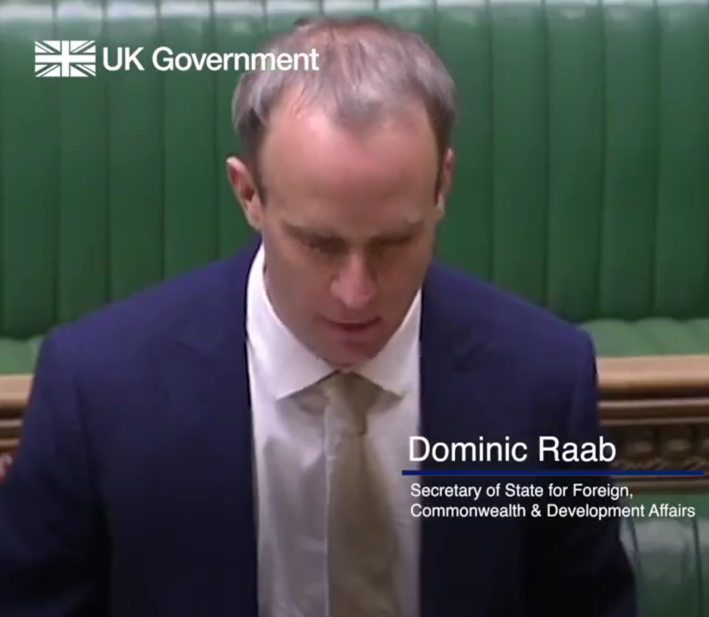 By Blog AccessJanuary 14, 2021No Comments

UK Government announces that “[w]e must take action, to make sure that UK businesses are not part of the supply chains that lead to the gates of internment camps in Xinjiang”.

In a speech before Parliament, the UK Foreign Secretary, Dominic Raab, described the nature and conditions of detention in China’s Xinjiang region as violating “basic standards of human rights”, and at their worst amounting “to torture and inhumane and degrading treatment”. He cites the large body of evidence, including first-hand reports by victims and diplomats, satellite imagery, and credible reports from NGOs, on the human rights violations being carried out in the province primarily against Uyghur Muslims, but also other minorities. The speech highlights Xinjiang’s position in the international supply chain which presents “real risk of businesses and public bodies around the world – whether it’s inadvertently or otherwise – sourcing from suppliers which are complicit in the use of forced labour”.

In response, the UK has announced four new steps in order to ensure UK organisations, both in the private and public sectors, are not complicit in nor profiteer from the human rights violations in Xinjiang.

Firstly, the Foreign Secretary announced publication of new detailed guidance to UK businesses on the specific risks faced by companies linked to Xinjiang, and the underlying challenges in conducting effective due diligence.

Secondly, the Home Office will introduce fines for business that do not comply with their transparency obligations – including introducing the necessary legislation as soon as possible.

Thirdly, the Foreign, Commonwealth and Development Office will work with the Cabinet Office to provide guidance and support, to UK government bodies to exclude suppliers, where there is sufficient evidence of human rights violations in any of their supply chains. This follows on from the announcement last September that transparency requirements will be extended to the public sector.

Fourthly, “the Government will conduct an urgent review of export controls as they apply specifically geographically to the situation in Xinjiang,” to ensure that all steps are being taken to prevent export of goods that could directly or indirectly contribute to the human rights violations in Xinjiang

If you would like advice on modern slavery compliance law and implementing training  within your company please contact us.

You can  watch the Foreign Secretary announce the measures in Parliament here or read the transcript of his speech here.