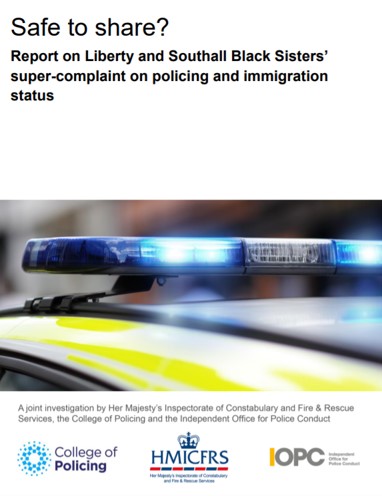 ‘Safe to share? Report on Liberty and Southall Black Sisters’ super-complaint on policing and immigration’ by HMICFRS

By Blog AccessMarch 9, 2021No Comments

A joint investigation by HM Inspectorate of Constabulary and Fire and Rescue Services (HMICFRS), the College of Policing (CoP) and the Independent Office for Police Conduct (IOPC) found that victims of crime with insecure or uncertain immigration status are fearful that, if they report crimes to the police, their information will be shared with the Home Office.

The report was published following a policing super-complaint, submitted by Liberty and Southall Black Sisters on 18 December 2018. The super-compliant concerned migrant victims in vulnerable circumstances, usually arising out of domestic abuse or modern slavery and human trafficking. This was also a first ever super-complaint lodged against the police.

The investigation  found that there are inconsistent approaches to information sharing between police and the Home Office about victims and witnesses to crime, and found that the current system was causing significant harm to the public interest. Liberty and Southall Black Sisters said that victims and witnesses with an unsettled immigration status are currently deterred from engaging with the police because of fears that this may make their situation worse. Consequently, victims are denied justice, while offenders go unpunished and remain a threat to the public. The report supported this conclusion.